Added 4 years ago by
243 Views
A white pelican enjoys a shower at a fish restaurant garden on July 26 in Cairo, Egypt.
Storm clouds over Whitley Bay on the northeast coast on July 26.
A man and a dog play next to a sandspit that emerged due to the drought on July 26 in the lake of Bracciano, Italy.
A surfer waits to paddle out at Tammaramma on July 26 in Sydney, Australia
People walk along a beach during sunset on July 26 in Cadiz, Spain.
Over 10,000 people were evacuated from campsites and homes due to fire burning forest on July 26 in southern France
Forest fires and lightning creates a frightening glow at night on July 26 in Pekanbaru, Indonesia
A layer of fog hovers over Webb Lake on a chilly morning on July 26 in Weld, Maine
An Indian woman searches for belongings in the debris of her damaged house in a flood affected on July 26 in Gujarat, India
A pedicab driver navigates a flooded street caused by strong rains on July 26 in the outskirts of Manila, Philippines.
A victim shouts for help in mud after flood hit on July 26 in Yulin, Shaanxi Province, China.
A woman with umbrella looks on as it rains on July 26 in Dhaka, Bangladesh
A stroller protects herself with an umbrella as she and her dog stand in pouring rain on July 25 in Cologne, Germany.
Macaque monkeys cool off with an ice block on a hot day at a zoo on July 25 in Hefei, Anhui province, China
A stroller protects herself with an umbrella as she and her dog stand in pouring rain on July 25 in Cologne, Germany.
Beach tourism on July 25 in Antalya, Turkey.
A man rides a motorbike in floodwater during a rainy day on July 25 in the old quarter of Sanaa, Yemen
Dry and cracked earth is pictured in the Aguilar de Campoo reservoir on July 25 near Palencia, Spain.
A baby macaque monkey drinks water from a tap on a hot day at a zoo on July 24 in Zhengzhou, Henan province, China
A view of the Parliament building during the Monsoon Session on July 24 in New Delhi, India.
A British Airways plane flies near a rainbow on its way to Heathrow Airport on July 23 in London, England.
A boy swims in Treska river to cool off from hot weather on July 23 in Skopje, Macedonia
Competitors dive into the river of Vrbas on July 23 in Bosnian town of Banja Luka,
Ipanema Beach during the sunset on July 23 in Rio de Janeiro, Brazil
Rex the dog cools off together with its owner at sunset on July 23 in a lake in Bucharest, Romania.
Strong winds moved through the metro area, the storm damage was apparent on July 23 in Prairie Village, Kansas.
A black bear licks an ice block with frozen fruit at Yantai zoo as high temperature hits Yantai on July 22 in Yantai, Shandong Province of China.
Revellers take part in the annual Gay Pride parade, also called Christopher Street Day parade (CSD), during heavy rain on July 22 in Berlin, Germany
Dead fishes are seen in dry ponds due to drought on July 22 in Aceh, Indonesia
A woman carries her daughter as she walks on a flooded street on July 22 in Kyaikto township, Mon state, Myanmar.
Canadian Coast Guard Capt. Victor Gronmyr looks out over the ice covering the Victoria Strait as the Finnish icebreaker MSV Nordica traverses the Northwest Passage through the Canadian Arctic Archipelago on July 22.
people cool off in a fountain at Dilworth Park on July 21 in Philadelphia.
Children cool off from hot weather in a fountain on July 21 in Shanghai, China 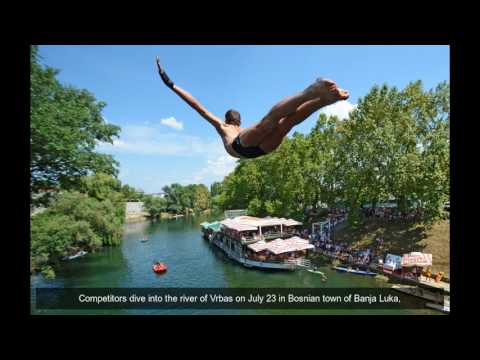 A white pelican enjoys a shower at a fish restaurant garden on July 26 in Cairo, Egypt. Storm clouds over Whitley Bay on the northeast coast on July 2...