Ok, so Norway is just blowing my mind. In fact, it's a bit of a problem. I'm constantly late getting to the spots I want to be photographing and exploring because it's so beautiful. Luckily, I think it's making for some fairly epic Norway travel vlog content.
On today's vlog, I headed west here towards a place called Trolltunga. Also known as The Troll's Tongue, Trolltunga is maybe one of the most epic locations in all of Iceland.
The only problem is, it's so beautiful here that I keep getting distracted. I was hoping to start my hike up Trolltunga at about 4pm. However, due to a dozen photo stops and an unexpected 2 hour delay to handle a bit of business stuff, I didn't eventually make it to the trailhead until after 8pm.
Luckily, it never really gets dark here in Norway this time of year, so if I had too I could hike all night.
So, my midnight hike up to Trolltunga started late, but it was just beautiful. The word of the day is ridiculous because everywhere I look here is just so beautiful it doesn't even make sense. Honestly, it's quickly becoming one of my favourite countries to travel, and might be the most beautiful country in the world.
The trek up is 11km, and the first 4km are mostly up hill. The vertical gain is 700m, but it feels like much more because it's basically straight up.
I was a bit slow on the go, so I couldn't make it to The Troll's Tongue until after sunset, so instead I found a cool spot to shoot sunset above a fjord that had a couple waterfalls dropping down it. I swear, if the rest of Norway is even close to this beautiful my camera is going to be busy.
After shooting sunset, and flying my drone, I pushed along to Trolltunga where I arrived just after midnight.
Eventually, I found a place to set up my tent, and I'm going to get a couple hours of sleep before starting tomorrow's Norway travel vlog with a bit of photography at the Troll's Tongue. I can't wait. It looks like such an epic location.
So, stay tuned to tomorrow's Norway vlog as there are going to be some epic photo ops.

Music in this travel vlog by DJ Quads http://www.soundcloud.com/aka-dj-quads 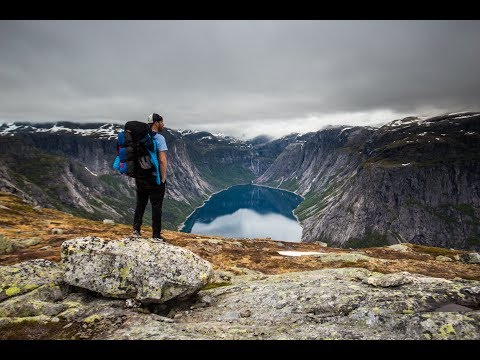