Added 2 weeks ago by vindheim
5 Views
回憶小時候，真的很常聽到《一千零一夜》的故事。其中，令我印象最深刻的就是「阿里巴巴與四十大盜」了！就算到了這把年紀，仍然會時不時就想起「芝麻開門！」這個通關密語，就知道這對我的生活有多大的影響了
走在布哈拉的街道上，好像到處都可以尋找到阿里巴巴的背影，有的時候還會聯想到阿拉丁神燈(!?)
“One Thousand and One Nights” migrated from medieval Arab society to the contemporary literary scene through a series of translations. The timeless and authorless tales have crossed all spatiotemporal, linguistic, and cultural boundaries, influencing world literature in an incomparable way and exemplifying the intersection of various discourses.
he stories of “One Thousand and One Nights” include romances, fairy tales, legends, parables, scary fables, anecdotes, and exotic adventures in both the real and the imaginary worlds. Despite the popularity of some tales like “Aladdin and His Lamp,” “Ali Baba and the Forty Thieves,” and “Sindbad the Sailor” – which became rooted in Western folklore and culture, less than a quarter of the 550 tales in the Arabic versions and their Western translations have made it to popularity. This is because they are unique to the medieval Arab society and its distinctive traditions.
In a town in Persia there dwelt two brothers, one named Cassim, the other Ali Baba. Cassim was married to a rich wife and lived in plenty, while Ali Baba had to maintain his wife and children by cutting wood in a neighboring forest and selling it in the town.
One day, when Ali Baba was in the forest, he saw a troop of men on horseback, coming toward him in a cloud of dust. He was afraid they were robbers, and climbed into a tree for safety. When they came up to him and dismounted, he counted forty of them. They unbridled their horses and tied them to trees.
The finest man among them, whom Ali Baba took to be their captain, went a little way among some bushes, and said, "Open, Sesame!" so plainly that Ali Baba heard him.
A door opened in the rocks, and having made the troop go in, he followed them, and the door shut again of itself. They stayed some time inside, and Ali Baba, fearing they might come out and catch him, was forced to sit patiently in the tree. At last the door opened again, and the Forty Thieves came out. As the Captain went in last he came out first, and made them all pass by him; he then closed the door, saying, "Shut, Sesame!"
Every man bridled his horse and mounted, the Captain put himself at their head, and they returned as they came.
Then Ali Baba climbed down and went to the door concealed among the bushes, and said, "Open, Sesame!" and it flew open.
Ali Baba, who expected a dull, dismal place, was greatly surprised to find it large and well lighted, hollowed by the hand of man in the form of a vault, which received the light from an opening in the ceiling. He saw rich bales of merchandise -- silk, stuff-brocades, all piled together, and gold and silver in heaps, and money in leather purses. He went in and the door shut behind him. He did not look at the silver, but brought out as many bags of gold as he thought his asses, which were browsing outside, could carry, loaded them with the bags, and hid it all with fagots.
Using the words, "Shut, Sesame!" he closed the door and went home.
Then he drove his asses into the yard, shut the gates, carried the money-bags to his wife, and emptied them out before her. He bade her keep the secret, and he would go and bury the gold.
"Let me first measure it," said his wife. "I will go borrow a measure of someone, while you dig the hole."
這裡是阿里巴巴大戰四十大盜的發源地，阿凡提智斗巴依老爺的起始點。布哈拉是座充滿浪漫神話故事的地方，也是一個幾度興衰的滄桑城市
布哈拉(Bukhara)，是烏茲別克斯坦第三大城市，位於澤拉夫尚河畔，沙赫庫德運河穿城而過，有2500多年歷史，人口約25萬，中亞最古老城市之一，9至10世紀時為薩曼王朝首都。
布哈拉歷史中心在布哈拉城，1993年聯合國教科文組織將其作為文化遺產，列入《世界遺產名錄》。布哈拉城內有各個王朝修建的宮殿、清真寺等，被稱為「博物館城」。絲綢之路途徑此處
位於絲綢之路中間地帶的兩個最重要的城市，撒馬爾罕和布哈拉。 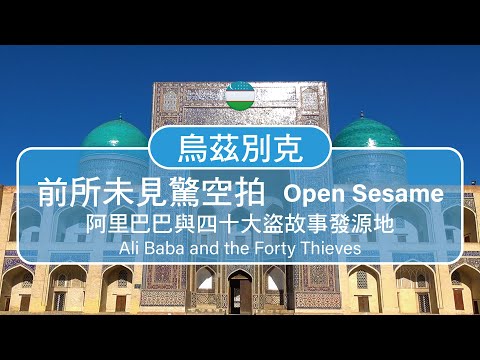